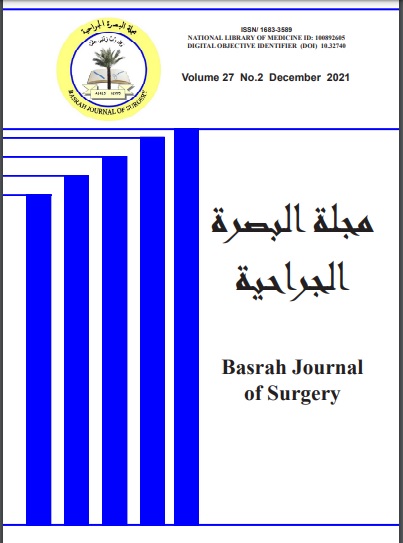 IS IT FEASIBLE TO CONTINUE THE ACADEMIC SURGICAL EDUCATION DURING THE COVID19 PANDEMIC?

Hypospadias, a nomination of medical term which was derived from the Greek terms: hypo (under) and spadon (rent, fissure). It is one of the congenital abnormalities of the genitourinary tract. There are about 400 different procedures described for correction of this type of anomaly, but Tubularized Incised Plate (TIP) Urethroplasty is considered the most popular one, and there are multiple variations in this procedure to get high success rate and decrease the complications. In this study, we compare between single layer dartos flap versus double layer dorsal flaps in TIP urethroplasty. This is to assess the outcomes of double dartos flaps versus single layer flap in TIP urethroplasty for primary distal hypospadias repair in Basrah Teaching Center regarding the success rate, and to investigate the importance of double flaps in preventing possible complications in particular, urethral fistula. A cross sectional prospective study was done in Basra Teaching Hospital, between January 2018 to March 2020. A total of 50 boys, 2 to 10 year- old with coronal and sub coronal primary Hypospadias were treated with TIP urethroplasty (Snodgrass procedure) by one surgical team, who were referred to Basrah Teaching Hospital from private and outpatient clinics. Patients were divided into 2 groups: (group I: 25 patients) single layer Dartos flap & (group II: 25 patients) double layers of Dartos flaps. Six patients were missing during follow up, coincidentally 3 patients in each group. The mean age was 4.55 and 4.86 year for groups I, II respectively, the mean operative time was 88.81 and 91.86 minutes for group I & group II respectively. The success rate was (81%) and (86%) for group I, II respectively, with exception of complications which need re-do surgery. Urethrocutaneous fistula (UF) was developed in (22.7%) in group I, and in (4.5%) in group II. Bleeding was happened in 2 cases (9.1%) in group I and 3 cases (13.6%) in group II. Meatal stenosis was diagnosed in (9.1%) in group I and (13.6%) in group II. Glans dehiscence was seen in 1 case (4.5%) for each group. There was a significant difference between the two groups in the occurrence of UF (P = 0.001). According to our evidence in this study, double dartos flaps is easy to be harvested, safe procedure, and represents very good choice for UF prevention. Although the number of complicated patients regarding bleeding and meatal stenosis are higher in group II than group I but they were statistically insignificant. Keywords: Hypospadias, Urethroplasty, Tubularized Incised Plate (TIP), urethral fistula, dartos flaps.

The term stricture usually used for constrictions of the anterior urethra. Otherwise in the posterior urethra the terms stenosis or contracture are applied(2).
The site and the age of the patient may give a hint about the cause of the stricture. For example, Meatal strictures may be caused by lichen sclerosis (the most common identifiable cause of anterior urethral stricture in young adults), and instrumentation or poor hygiene at any age(2).

This is to evaluate the efficacy & safety of a modified ejaculation preservation Transurethral Resection of Prostate ( epTURP ) , in comparison with the traditional technique - Transurethral Resection of Prostate ( TURP ) . A prospective controlled clinical interventional study whereby 40 Iraqi male patients scheduled for TURP were randomly assigned into 2 groups; group 1 treated with epTURP, and group 2 treated with TURP. Pre & post-operative evaluation of the patients included history taking, filling the international prostate symptom score ( IPSS ), the international index for erectile function ( IIEF – 15); questions 9,10,13 & 14, measurement of ejaculate volume, Uroflowmetry (Q-max) & measurement of Post Voiding Residual urine (PVR). Follow up schedule was at 6 weeks & 3 months post-operatively. The Mean age of patients was 59 year, mean prostate volume was 46 ml. Post-operatively 19/22 patients in the epTURP group & 3/18 patients in the TURP group had preserved their antegrade ejaculation, which led to a significant difference between the 2 groups in mean ejaculate volume & IIEF .There was a comparable improvement in post-operative values of IPSS, Q-max & PVR in both groups. Complications were minimal & manageable in both groups. In Conclusion The epTURP was in our experience a safe & effective technique in preserving antegrade ejaculation & improving urinary outflow in patients with prostate volume approaches 50 ml . Keywords: Transurethral resection of prostate, ejaculation preservation, uroflowmetry, post voiding residue, ejaculate volume

Abstract:
Background and objectives: Long bone fractures are witnessed almost every day in the orthopedic practice. Femoral shaft fractures (FSF) generally are due to high energy trauma in working age group. non-union of FSF is not infrequently encountered challenge. This study reviews cases of FSF that ends up with non-union in Basra Teaching Hospital to explore some factors related to non-union.
Patients and methods: A retrospective case series were conducted in Basra Teaching Hospital from January 2012 - June 2014 including 124 patient with FSF. Thirty three patients were identified during the study period (18 months), demographic criteria and injury patterns, initial treatment, early complications, subsequent interventions and fate of the patients are described.
Results: Among 33 patients with nonunion FSF, 23 were males and 10 females, aged from 15 to 60 years (mean = 35). High energy trauma is the chief source of FSF in this analysis .
After 9 - 12 months from initial trauma, patients ends up with non-union, 9 atrophic, 13hypertrophic and 11 infected non-union. Thirty patients underwent revision surgery, with addition of bone graft , three patients no revision surgery, within the study period ( 18 months ), 25achieved successful union or showing signs of progressive union , 3 had united fractures with chronic osteomyelitis , 5 non-united fractures .

Abstract
Background
Quality of life issues are increasingly being recognized as critical in the spectrum of cancer treatment that the prolongation of survival cannot be the only therapeutic objective. In some cases, patients and physicians may have to choose between the prospects of longer survival or better quality of life during the remaining time.
Patients and methods: This is a cross sectional study carried out to measure health-related quality of life in 275 women with breast cancer attending Al-Basrah oncology center during six months period, data were collected through direct interview using the standard European Organization for Research and Treatment of Cancer Core Quality of Life Questionnaire (EORTC-C30) and its complementary questionnaire specific for breast cancer (QLQ -BR -23).
Results: The study showed that the mean score for global QoLwas52.39 ±17.1 indicating that the patients had average scale score. The most important predictors of global QoL were physical, role, cognitive and sexual functions in addition to future perspective and arm symptoms.
Conclusion
The most important determinants predicting global QOL were role, physical, cognitive and sexual functions in addition to future perspective and arm symptoms.

Objective:To prospectively compare the feasibility and safety of tubeless percutaneous nephrolithotomy (PCNL) Vs standard PCNL.
Patients and methods:220 patients undergoing PCNL were randomized to two groups: Group A (tubeless PCNL) with antegrade placement of a Double-J stent without nephrostomy and group B (standard PCNL) with nephrostomy tube placement postoperatively with 110 patients in each group.Inclusion criteria were stone size more than 2 cm, single tract puncture with complete clearance, less than three stones with a diameter Results:There was no significant difference between the two groups for patient demographics and stone characteristics. There was no statistically significant difference between the two groups for the complications, stone clearance, need for ancillary procedure, mean postoperative drop in haemoglobin, need for blood transfusion. The mean postoperative ana;gesic requirement, operative time and hospital stay was statistically significantly higher in the tubeless PCNL group compared with the standard PCNL group with p values of 0.000, 0.040, 0.001 respectively.
Conclusion:Tubeless PCNL is considered a safe and efficient technique in any tract location (upper, middle, lower), in patients with bilateral disease and effective procedure if done in a selected group of patients.

the benefit of tympanometry for certain ear diseases


Tympanometry is an objective test measure the mobility (compliance) of the tympanic membrane as a function of applied air pressure in external canal, It is particularly useful in assessing the secretory otitis media during childhood. This is a prospective study performed at ENT department of the Basrah Teaching Hospital for the period from November / 2013 to February / 2014. The study is to assess the advantage of tympanometry as a diagnostic tool and to audit the uses of tympanometry in the ear diseases in ENT department of Basrah Teaching Hospital. The statistical calculations were carried out using chi-square test. The p value >0.05 was considered statistically insignificant. Fifty patients aged (4—84years) who were referred by otolaryngologist to our audiological unit for audiological assessment were included in the study. Out of these 50 patients (55 ears had otitis media with effusion, 12 ears had Eustachian tube dysfunction, 4 ears had barotraumas, 7 ears had acute otitis media, 4 ears had chronic suppurative otitis media, 2 ears had otosclerosis and 15 ears were normal on clinical examination). The clinical diagnoses was compared with tympanometric findings and the coincidence between two, was as follow; 80% in otitis media with effusion, 75% in barotraumas , 100% in acute otitis media. In conclusion; tympanometry is an important tool in the diagnosis of some of the ear diseases. It is not necessary to performed in every case as the clinical examination could clarify the diagnosis in most cases . Keywords: benefit , tympanometry